Say you have a list of locations with their corresponding latitudes and longitudes, and you want to put this data to use. Maybe you are a food delivery service that wants to find all Korean restaurants in a 10 kilometer radius. Or maybe you are advertising a job opening in New York but you want to publish it to nearby cities as well. Or maybe you are a dating app that wants to calculate the distance between potential matches to an absurd degree of accuracy.1

While it is very tempting to use the latitude/longitude data as coordinates in a 2-D space and use the L2-norm to compute the “distance” between two locations, the approach fails due to three reasons:

In this article, we look at a method to compute the distance between two points on the surface of the Earth and extend it to query a geospatial dataset for nearest neighbors.

Figure 1. Mercator Projection is a cylindrical map projection of the Earth. Because the spherical Earth is projected onto a cylinder to get a “flat” coordinate system, the regions near the poles appear much larger than they actually are. Nonetheless, this scheme has been used extensively in the past (for example, Google Maps ditched Mercator projection view for a globe view only in 2018). The scale at which this phenomenon is observed can be interactively experienced at thetruesize.com) [source]

Note 1: A key assumption here onwards is that the Earth is spherical in shape, which is not strictly true as the Earth’s shape is closer to an ellipsoid with the radius of curvature at the equator being ≈6378 km and that at the poles being ≈6357 km. Because the difference in the radius is not large, the error is generally small enough to be safely ignored.

The solution to finding the distance between two points along the Earth’s surface lies in using the latitude/longitude values to compute the central angle between them. The central angle \(\theta\) is defined as:

Let’s put this knowledge to use. 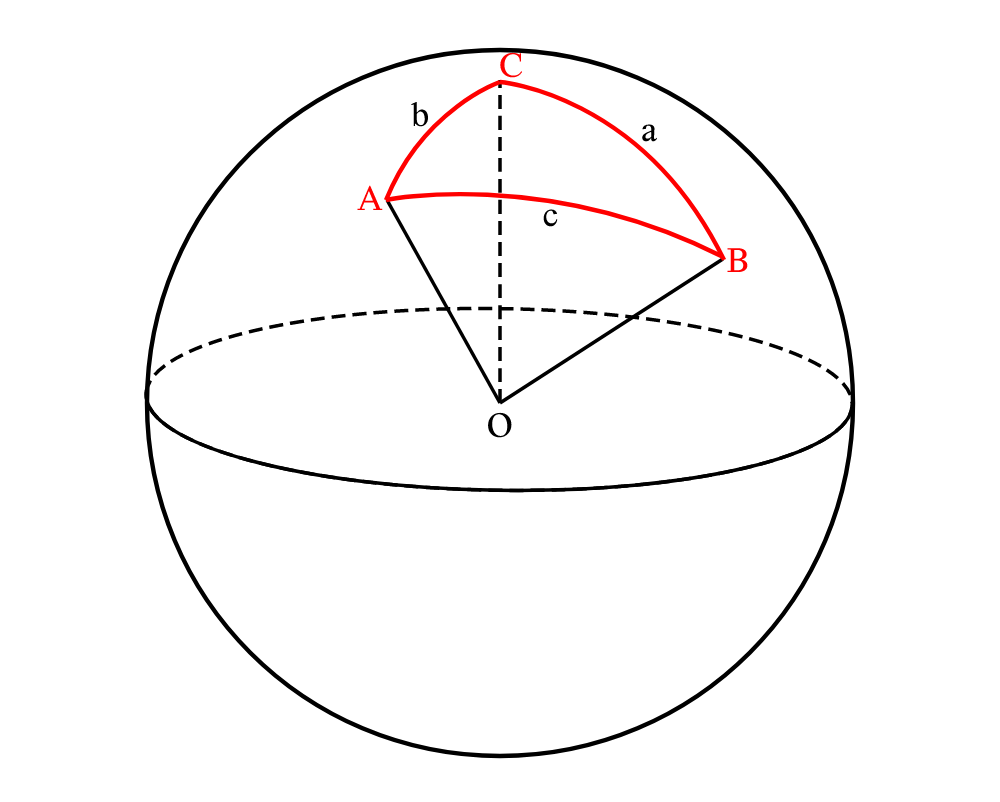 Figure 2. A, B, and C are three points on the Earth’s surface, and O is the center of the Earth.

For a sphere with radius \(R\), the above equation changes to

This formula has been around for a long time, but it is cumbersome to use without a calculator. It requires multiple trignometric lookups, calculating squares, and even a square root. To simplify the calculations, we use a lesser known trignometric function haversine, which is defined as:

Using this definition in \(eq. \eqref{eq:2}\), we get what is called the Haversine formula:

In the past few hundred years, the Haversine formula has been used extensively by sailors in planning their voyages.3 Instead of multiple difficult operations required by \(eq.\eqref{eq:2}\), this formula makes it really simple to perform the calculation by requiring only a few lookups in the haversine table.

Let’s compute some distances! We will be using an openly available dataset of US Zip-codes and their corresponding latitude and longitude values. Also, we will be using \(eq.\eqref{eq:2}\) instead of \(eq.\eqref{eq:3}\) because we aren’t nineteenth centure sailors, and also because computing sin, cos, squares, and square roots has become trivial.

The script produces the following output:

We can compare our results against the results obtained from Google Maps:

Now that we have a reliable distance metric in place, let’s shift our focus to querying our data for nearest-neighbors. We are primarily interested in two kinds of queries:

The most obvious way to perform queries of these types is the brute force approach. For any given point, we simply iterate over all other points in our dataset and compute each point’s distance from the given query point. Under the standard assumption that the query point may not be present in the dataset, the brute-force approach has \(O(D.N)\) (where D is the dimensionality of the data, which in our case is 2) time complexity. Iterating over all data points for a query is very computationally expensive, especially if the size of the data is large. To speed up the query mechanism, we now look into preprocessing algorithms that can take advantage of its inherent structure.

A standard approach to optimize the brute-force approach is to use a specialized tree data structure called a k-d tree. A k-d tree, or a k-dimensional tree, is a binary tree which recursively splits the space into two by building hyperplanes. A hyperplane is defined as a subspace whose dimension is one less than the dimension of its ambient space (a hyperplane in 2D is a 1D line, a hyperplane in 3D is a 2D place, etc.). Each node is associated with an axes and represents a hyperplane that splits the subtree’s search space perpendicular to its associated axis. All points on one side of this hyperplane form the left subtree, and all points on the other side form the right subtree. All nodes at the same level in a k-d tree are associated with the same axes.

Video 1. k-d tree in 2-dimensions: While constructing a k-d tree, we alternate between splitting perpendicular to the x-axis and perpendicular to the y-axis at each level of the tree. Each split is made at the median of all the points in the subtree along the associated axis of that level.

Once the tree has been constructed, searching and range queries are quite simple to execute. For either type of query, we traverse the tree from the root until we reach the leaf node that would contain the query point. Then:

As k-d trees can split the space only along the axes, they only work with Minkowski distances such as Manhattan distance (L1 norm) and Euclidean distance (L2 Norm). Unfortunately for us, the Haversine distance metric is not a Minkowski distance. We now build upon the basic concepts of the k-d tree, and look at a data structure that does not depend on the explicit coordinates of each point, but only on the distance metric.

At each node of the tree, we select two points in the data that have the maximum pairwise-distance between them. Using the same distance metric, all other points in the subtree are assigned to one these two points. Using the centers, we create two hyperspheres that span the points associated with the respective centers. Each of the newly formed hyperspheres may now be further divided into two hyperspheres each, and this process continues recursively until a stopping condition is reached (a certain depth is reached, or each leaf node has fewer than a specified minimum number of data points, etc).

Video 2. Ball tree in 2-dimensions: The two points with the largest pair-wise distance are selected, and are considered the center of a hypersphere. All points are assigned to the center that is closest to them, and two hypersphere of radius same as the distance of their center to the farthest associated point are created. These hyperspheres are further broken down into two hyperspheres each, and this process continues recursively.

Note 2: Instead of considering the two farthest points to be the centers of the hyperspheres, we can also use the centroid of each cluster. This approach results in tighter spheres and more efficient queries, but it is not possible to use with non-Minkowski distances as computing the centroid in over them is an ill-defined problem.

Note 3: Using a Minkowski distance metric and the method described in Note 2, the tree construction time complexity drops to \(O(N\log(N))\)

Implementation in Python
Let’s put everything together in a few lines of Python code. The scikit-learn library has a nice implementation of BallTree with support for Haversine distance right out of the box.

The script produces the following output:

If you found the article and its premise interesting, here are some other interesting resources: